A Chinese company says it has developed a robot that can perform Covid-19 testing with unprecedented speed and efficiency.

The robot, which made its debut at the World Robot Conference 2022 in Beijing on Thursday, looks like a vending machine and provides accurate polymerase chain reaction (PCR) test results without the need for a laboratory. 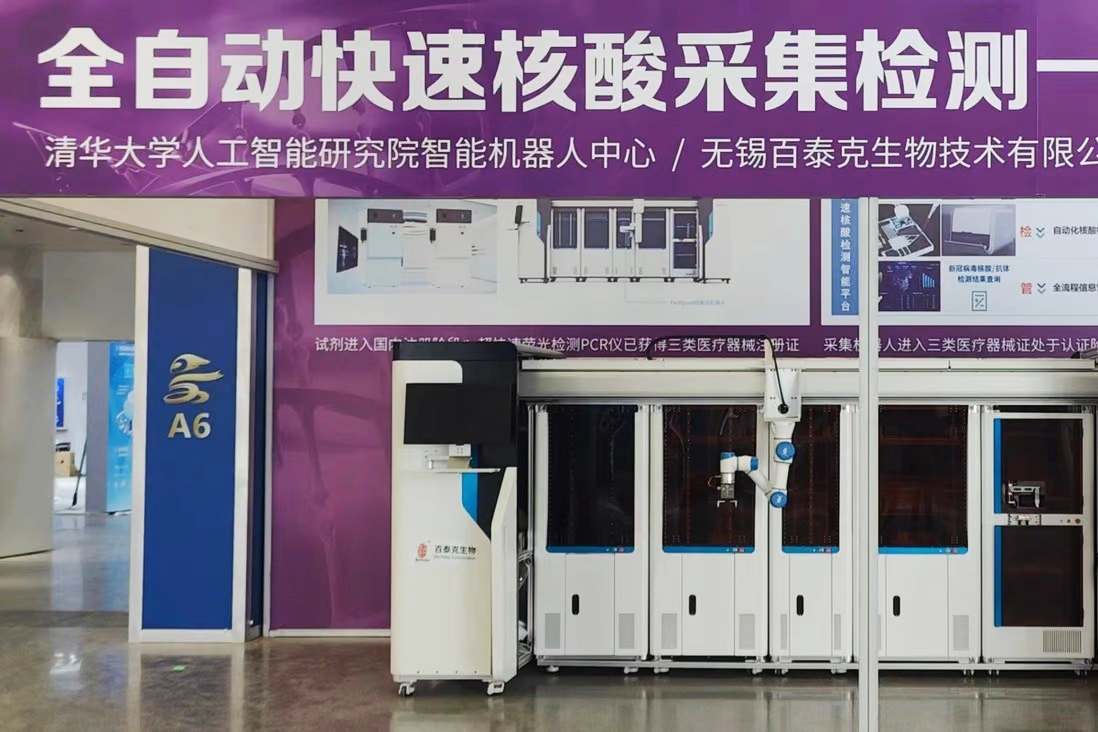 The robot, developed by Chinese firm BioTeke, can give results for up to 80 users in 45 minutes – much faster than traditional methods. It can process samples from up to 320 people at a time.

There are other Covid-19 test robots on the market, but most of them focus on the sampling process, with robots standing in for on-site staff to collect oral swab samples. The samples are then sent to a laboratory for analysis, and it usually takes more than 12 hours for users to get their results.

“This new robot provides a one-stop alternative because it does testing independently,” said a BioTeke engineer surnamed Meng in an interview on Monday.

The robot contains different modules for sampling, extraction, purification, amplification, detection and result analysis, all of which are connected like the rows of a vending machine.

The sampling module was developed by BioTeke in cooperation with a research centre at Tsinghua University’s Institute for Artificial Intelligence.

“Researchers built models of human mouths and developed an image recognition algorithm for a high-accuracy mechanical arm. The arm is able to move autonomously and gently collect oral swab samples from a user’s throat,” Meng said.

After collection, the nucleic acid in the sample requires purification and amplification to yield a result. To achieve that, the robot imitates the laboratory process, with a mechanical arm passing the sample tubes around. When the tube reaches the analysis module, the result is recorded and the waste is disposed of.

Meng said the robot’s modular design made it easy to fix and maintain components and refill the reagents used for testing.

The robot is also competitive in cost. “It cuts labour and sample shipping costs, and there is a mature market for the reagent packages needed,” said Meng.

BioTeke is seeking government cooperation to put the robots into widespread use, as Covid-19 test results are linked to sensitive personal information such as ID cards and phone numbers.

“We have licences for some of the modules inside, and the robot is undergoing verification by the National Medical Products Administration,” Meng said.

“At this stage, epidemic prevention work mainly focuses on the mass screening of the population. The robot can serve as an affordable rapid screening method. We can recognise positive carriers before they start spreading the virus in the city to effectively avoid the spread of the epidemic,” Meng said.

Once deployed at scale, the robot will greatly relieve the pressure on medical staff in China, who have been overwhelmed by routine Covid-19 screening, he added.